The 2019 Food and Wine Festival has ended so we wanted to recap it in 3 parts, the good, the bad, and the amazing. Let’s start with the good. These are ones that were good but not great. We tried our best to try everything but it was way too much to eat in a few days. Let’s get right into it. 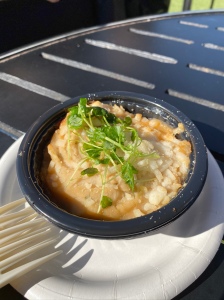 The impossible cottage pie was extremely interesting. It was good and tasted like a cottage pie. I feel like if you put that in front of me and said it was mashed potatoes and beef I would eat it and not know it wasn’t. It was actually mashed cauliflower and not real meat. This was my first experience with plant based “meat” and it was a good one. 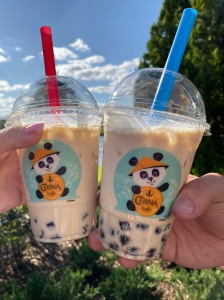 Bubble Tea was a recent discovery of mine. I always loved tea but never had bubble tea. This would fall under the amazing category if “mango” was not in the name. It tastes great and is super smooth but there was no trace of mango. It tasted like tea with milk that was very sweet. An excellent refreshing drink just lacking the mango. 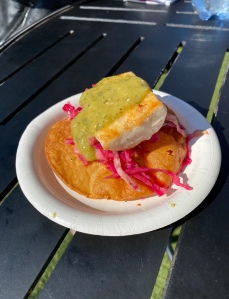 The Pacifico striped bass tostada was something I was a little worried about. I like fish but it has to be done right otherwise it could be terrible. The tostada was a crunchy platform for a delicious slaw that served as the bed for a well cooked piece of fish. The fish was cooked well and did not have a fishy taste but was lacking in seasoning making it on the blander side. 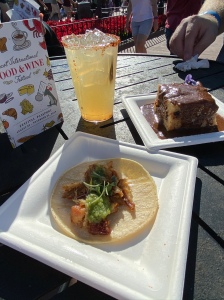 The taco de Puerco was a shredded pork belly taco that was very tasty. The tortilla tasted fresh and homemade and the pork belly was great. The only thing that didn’t match up was the price. It was 7 dollars for one very, very small taco with not a lot of filling. The other item we had here was the chocolate bread pudding which was better than the taco. It was dense but not in a bad way. It was very sweet and skated the line of almost being too sweet. It was a great item to share and had a very silky taste to it.

We had the frozen Rose at the Alps and it was basically just that. Frozen Rose. It had a slushie look and texture but just tasted like ice-cold Rose, which is never a bad thing.

The sweet corn fritters were good but a little falsely advertised. They really weren’t a corn fritter, they were almost just doughnut holes with a sweet jelly on top instead of inside. Definitely, an interesting bite and we did enjoy it.

I had low expectations for this. I’m not the biggest pumpkin guy but I love chai tea. This really tasted like neither of those. This was a thick milkshake that tasted like everyone’s guilty pleasure, uncooked brownie batter. You’re never supposed to eat the batter but we all have. This taste exactly like that and it was a great treat.

This soufflé was super light and airy. The perfect texture for a soufflé. When you mix that with a great sweet fig marmalade on top it made for a really satisfying bite. 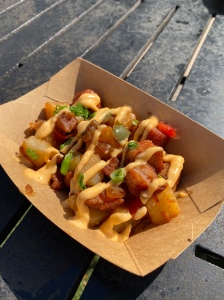 Spam is another one of my guilty pleasures. I do not have it often but when I do, I can eat it right from the can. It’s not good but I like it. The teriyaki glazed spam, actually made spam good. The spam its self was very flavorful and it did not just taste like processed meat, add the hash to the mix and you have a winning combination. 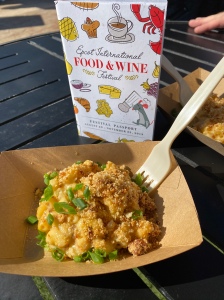 It’s hard to mess up Mac and Cheese but Active Earth found a way to. It was very dry and didn’t taste anything like cheese. Its called loaded mac and cheese but it’s loaded with zero flavor.

Canada will show up later in the amazing list but for now, it’s on the bad. The Canadian cheddar bacon soup. The soup was basically just a bowl of salt. The soup was served with a pretzel roll that was lacking salt. Kind of ironic. If you dipped the bread into the soup that didn’t help either. The soup was just way too salty and even dipping bread in the lacked salt didn’t tame the salt in the soup. All this did was left us thirsty.

This was a huge disappointment for me. Starting with the sad excuse for a pretzel bun. It was very dry and lacked any kind of flavor. Then when you add the brat to it, the proportions were way off. The bun was so thick holding this very skinny brat. The brat was also dry and lacking flavor as well. Just a misfire for something I should have loved.

The spicy roll was not the best. I should have known sushi at a festival wouldn’t be good but I’m also the guy that has eaten sushi from a gas station and enjoyed it, so who am I to judge. The textures were all off here. I know it’s not required but a lot of spicy rolls have a crunchy element to it which this was severely lacking. The rice and the seaweed had a similar texture, tough and chewy. I never had rice before that was chewy. Just overall not good.

Here we had the smoked corned beef, the corned beef laid on top of a bed of crispy potato chips. The corned beef was seasoned well and very tender. It was topped off with a delicious slaw and a creamy beer cheese. This was a terrific bite and one of my favorites from the festival.

Canada is on the list again but this time for a good reason. Le Cellier is one of our favorite restaurants in Epcot, so naturally, we were excited about this one. The meat was so tender and not at all tough. There was a truffle butter sauce on top and it was the perfect complement to a great piece of meat.

If I was the type of person who gets embarrassed, I would be embarrassed by the number of times I went here. When you go, you are given a sheet of paper with all the flavors and add ons and you make your own drink. Mixing flavors and candy was a way to really bring the kid out in me and what better place than Disney to bring out your inner child.

Italy was our favorite overall with both items we had making the amazing list. The first item we tried was the ravioli carbonara. The ravioli was cooked well and not mushy. The sauce on top was an excellent compliment. If I had to have a complaint on this, they were a little heavy handed with the bacon, which normally is not bad but the bacon tasted a little too smokey for my liking. It was easy to push the bacon to the side and eat a perfect ravioli without it.
The chicken tenders and marina sauce should be nothing special, but it really was. The breading on the chicken was packed with flavor but it wasn’t too much. It was cooked very crispy. The marinara sauce it came with was better than a lot of Italian restaurant sauce. I could have stuck a straw in the sauce cup and drank it, it was that good.
Japan

The teriyaki chicken bun was a trigger for me. It made me think of my childhood. My dad would bring home pork buns from time to time when he was working in a certain area. Although it’s a different protein it was really reminiscent of that. The bun its self was steamed well and very flavorful. I went back for seconds on this one.
That’s our recap of 2019’s Food and Wine festival. Stay tuned to us for more Disney to come but in the meantime be sure to check out Quickfire #9 and Oga’s Cantina. For everything else be sure to check out our Instagram.