This post is a rarity for us. Spoiler alert here, it’s not going to be a good one. We try to keep our page about great places to eat and only really talk about the bad ones when it just ruins our nights, like Violettes Cellar and Liberty Tree Tavern did.

The First thing about this place is how it looks from the outside. It has the look and feel of an old school diner vibe. However, inside that’s not the case. Its a lot fancier than we both were expecting, which is not a bad thing. When something is fancy you do tend to expect great service. Cafe Luna exists to tell you that’s not the case. 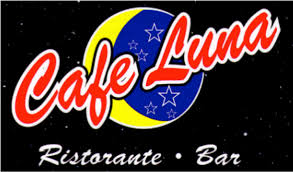 The first thing you order in almost every restaurant is your drink. Drink it slowly, getting refills was not easy. It sometimes took asking two different people, one who was in fact, our server to get a refill. We also seemed like we were a bother to them, and as a paying customer that’s now how you want to feel.

We placed our appetizer orders and everything came out as we ordered and relatively smoothly. We had fried zucchini, potato croquet, and mozzarella carozza. The appetizers were not bad. The croquet was surprisingly good. Well seasoned and creamy. The zucchini was your normal fried zucchini no way to screw that one up. The mozzarella corozza was the weakest of the three. It was very bland and dense. If it didn’t come with marinara sauce, this one would have been even worse.

When it came to the entrees, it left a lot to be desired. They advertise homemade pasta and that was what we got. When someone says homemade pasta you would expect something great but what we got was soft mushy pasta. It’s not even worth my time writing or your time reading to keep going on about their food. The service was the main problem that really came into play next.

We went for someone’s birthday. We checked with them first if we could bring our own cake and they were fine with it. The person whose birthday it was had no idea. Our server brought out the cake placed it in front of him and they started to sing happy birthday. It was the saddest happy birthday I have heard in a restaurant but I understand since I don’t like singing happy birthday either. After they finished they just walked away. The full cake was left in front of us. We had no silverware, no plates, nothing. Did they expect us to just eat this with our hands? We tried to get someones attention numerous times and were basically ignored.

Finally, someone who I can only assume was some kind of manager, by the way they were dressed and their “I’m better than you” attitude came over. He asked us if we needed the cake cut with some attitude. Of course we need the cake cut! You brought it to us with no silverware. We would have cut it ourselves, we didn’t care but we had nothing to cut it with. They cut the cake and brought it out. We then noticed that the same guy who brought back our cake was talking with the hostess and then both kept looking over at us while they were talking. I can’t say for sure they were talking about us but it sure seemed like they were. If we would see them looking over they would quickly look away. It was truly infuriating.

This was an example of how to not bring customers back, give us bad service, bad food, and bad attitude. This is somewhere not to go, to find places you want to go be sure to stay on Foodierooneys.com and then check out our Instagram by clicking HERE.